Posted on September 26, 2014 by Brett David Roberts in Headlines,NFL 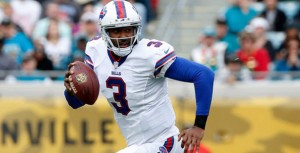 The Texans lost 30-17 last week to the New York Giants, and after starting 2-0, its put a damper on an otherwise great turnaround. LT Duane Brown said that the team “(doesn’t) think about last year at all.” That’s somewhat hard to believe, but Fitzpatrick could easily take this team back into that dark age. He said, “It’s definitely about being steady…not letting last week’s performance kind of affect the work you put in this week.” If Fitzpatrick can shake off the cobwebs of last week’s disaster, the Texans should be able to pull out this home contest against the 2-1 Bills.

Fitzpatrick spent four seasons in Buffalo, starting 53 games and earning a $59 million, six year contract in 2011. He was cut loose about a year after that for his 39 interceptions in 2011 and 2012, which tied the league worst, and he also fumbled the ball 15 times. After a one year stop with the Titans, he became a starting QB again this season.

If Foster is able to go, the three-time Pro Bowler will give the Texans an easy edge in this contest. Alfred Blue stepped in for Foster last week and the rookie had 78 yards on 13 carries, but one was a 46 yard run, meaning that the other 12 carries were good for only 32 yards, less than three per carry. Buffalo has also not allowed more than 90 rushing yards this year, so if it is Blue carrying the ball, the Texans may be in trouble. Tough defenses tend to stifle young running backs.

Buffalo lacks in pass coverage though, and ranks 26h in the NFL allowing 267.3 yards per game. E.J. Manuel is still learning the ropes at QB and threw 7-of-21 for 49 yards to his WRs.

Sammy Watkins caught eight passes for 19 yards. He had 117 yards the week prior, and the Bills know they have a long ways to go both covering the pass and producing its own pass offense. The Bills are 0-10 when they trail by more than 10 points, so expect Foster to run the ball down their throat if he’s able to go. If not, Fitzpatrick better get his act together quickly.