Posted on September 15, 2017 by Brett David Roberts in College Football,Headlines 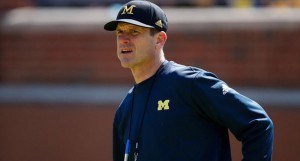 Air Force has really come on in recent seasons. It finished 10-3 last season while going 5-3 in Mountain West play. Air Force defeated South Alabama 45-21 at the Arizona Bowl, to cap its season with a six-game win streak it has carried to seven this year, after winning its week 1 matchup against VMI 62-0. This week, however, brings the challenge of the season for the Falcons as they travel to Ann Arbor to face No. 7 ranked Michigan. The Falcons are 24-point underdogs, but enthusiasm in the program runs high over the opportunity to challenge a vaunted program in the Wolverines.

Air Force quarterback Arion Worthman is a great dual-threat quarterback with blinding speed. The sophomore averaged 112 rushing yards during the six-game win streak that closed the season, which mostly was a result of him becoming starter, to begin with. He is also a good passer, and threw for 207 yards at the Arizona Bowl. The Falcons can employ a much more balanced offense than the program is typically known for, and the team returns a starter at wide receiver in Tyler Williams while Tight End Ryan Reffitt is experienced as a starter, as well.

In game 1, Worthman threw for 172 yards on just 12 attempts, averaging 14.33 yards per completion with two passing TDs and no picks. He rushed for another 33 yards on 11 attempts, with a rushing TD, and Timothy McVey had 98 yards on 10 carries out of the backfield, including a long run of 27-yards and a TD. While Air Force did in typical fashion rush en masse, with 67 attempts for 473 total yards on the ground, it is trying to prove it can be a threat in the air when it wants to be, and Worthman certainly indicates there is value in that attempt. His backup, Nate Romine, also completed 2 of 2 passes for 18 more yards.

Michigan is 2-0 after having defeated No. 17 Florida 33-17 in its opener and knocking off Cincinnati 36-14 in Week 2. The Wolverines, once again, return a dominant defense—perhaps second-only to what Nick Saban has in Alabama. Against Florida, the Wolverines overcame a 17-13 halftime deficit as Quinn Nordin hit two 50-plus yard field goals in the same game, to really help the Wolverines advance past then-No. 17 Florida. The team was ranked 11th going into that game, and it propelled Michigan into the top-10, settling in at No. 7 as it enters this week.

In the win over Florida, Wilton Speight threw just 11 of 25 and had two interceptions, but Ty Isaac had 114 rushing yards and Chris Evans rushed for another 78. In addition to that, the Wolverines defense just stifled Florida. The Gators managed only 11 rushing yards on27 attempts, and starting Gator quarterback Malik Zaire lost 29-yards on his eight total attempts. Michigan would hold its first opponent under 200 total yards (192), and then repeated that feat again in Week 2 against Cincinnati, as the Bearcats managed just 200 total yards.

Speight was better in Week 2 with 17 of 29 completed for 221 yards and a TD, and Isaac was dominant out of the backfield again with 133 yards on 20 carries. The Wolverines rushed 37 times in the game and averaged 5.2 yards per attempt, as the Cincinnati defensive line really had no answers for some of the schemes Michigan tried. Donovan People-Jones had 44-yards on just one carry.

Overall, Michigan is just too good of a team for Air Force to reasonably stop the likes of Isaac, and it is also going to have a tough time getting any kind of positive yardage, despite its strengths rushing the football. Air Force may be able to consistent generate yardage against most schools, but Michigan’s defense is exceptional enough to put the clamps on the Falcons. That said, this game could prove slightly closer than the 24-point spread. If Air Force just proves to have enough offensive game to make it that interesting, bettors may find value in the high octane Mountain West program.