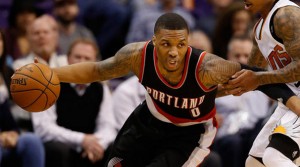 The NBA season has arrived, with games due to tip off Oct 22nd, on Tuesday. Bovada has released odds of divisional crowns for the 30 NBA teams, and we are going to handicap that aspect as well as take a quick glance at each team as it enters the 2019-20 season. There are no over/under for season wins currently available for betting on Bovada, but we are going to predict season win totals for each team in the brief synopses of each of the six divisions in the NBA, moving here into the NBA’s Northeast Division, with a look at the bottom three teams in it (Part 2).

If the Portland Trail Blazers have to play the role of dark horse division contender, it will. Listed at +400, behind both Utah and Denver, the Blazers pose a legitimate challenge to both teams, whether we are talking of a straight-up series or a season win total. Portland has been on the rise for several seasons, bolstered by one of the NBA’s best point guards (and rappers, we suppose) in Damian Lillard. “Dame” is perfectly complemented by CJ McCollum, and that dynamic duo could become a terrific trio with Anfernee Simons showing a lot of flashes of future stardom. Getting Simons minutes in that talented backcourt is a priority for Portland, and if it means going small with three guards, expect the Blazers to try that look plenty.

The biggest source of intrigue will be how Portland approaches its starting 4/5 spots. Al-Farouq Aminu and Maurice Harkless are both out, and that promotes Zach Collins to be the likely starting 4. Alongside him will be the former Miami Heat center, one discarded Hassan Whiteside. How these two could fit together is anyone’s guess, and behind them the Blazers also have Skal Labissiere and Pau Gasol, both of whom have their own issues and question marks but are certainly serviceable as backup bigs. Kent Bazemore is an underrated addition and along with Mario Hezonja, the two should vie for a Sixth Man role, with Bazemore both a former starter and the more likely to win it of the two.

The loss of Seth Curry does damage the shooting of the second unit, but the Blazers are not a deep team, to begin with. It is one that will rely heavily on its starters, particularly the backcourt, and this lack of balance is likely what leaves it a step shy of Denver or Utah in the standings.

Perhaps the Minnesota Timberwolves’ perpetual disappointment and underachievement have caught up to it. NBA oddsmakers list the Timberwolves as gigantic underdogs in the division at +10000, but this team is really a lot better on paper than it has been on the court. It would be reasonable to expect an improvement, perhaps if not for how crowded the Western Conference is, to begin with. The Wolves have two underachieving stars in Andrew Wiggins and Karl-Anthony Towns, two young stars who both drew immense criticism from a malcontented Jimmy Butler before he was excised from the team’s lineup. The Wolves now start Jake Layman at small forward, which will eventually give way to either Jarrett Culver or Josh Okogie, if not instantly.

There is a downgrade in talent due to that, and Towns must emerge as more of an aggressive superstar. At this point, his numbers are ringing nearly hollow with the Wolves’ defensive shortcomings and annual falling short. Gorgui Dieng is almost forgotten, as a former starter, and Rob Covington will be the starting 4-man despite being more of a small forward at any rate. Jordan Bell may factor into depth, or even become important if the Wolves find Covington needs to slide back to the wing.

Whatever the case, the T-Wolves impressive rebuild stagnated when Wiggins failed to become a star, and Towns failed to become a superstar. Dario Saric underachieved after coming from Philly, which help him fit in with the culture, but ultimately left him to head to the Phoenix Suns. There is not a lot of positive continuity, and for as good as Minnesota has been on paper it has not been anything of a threat to the top teams in the standings. That probably does not change this year, either.

The Oklahoma City Thunder are now in the first stage of a rebuild, having said goodbye to Russell Westbrook, the last piece of its contending team that once featured him, James Harden, and Kevin Durant. Now, the best player on the team is Chris Paul, but the focus of the rebuild at this juncture really has to be Shai Gilgeous-Alexander. Hamidou Diallo may eventually factor into it, too, though his upside is still a little unclear despite a decent rookie season. Terrance Ferguson was unimportant in his second year after showing signs as a rookie.

The rest of the roster is a mishmash of veterans that will be playing for bigger paydays if we are really reducing this rebuild to what it is. Gilgeous-Alexander may not even be here by the time it really takes shape, as he has two years left on a rookie contract that will then expire and leave him to test free agency (barring an extension).

It is tough to read much into anything OKC is doing at this point, because it is merely surviving after saying goodbye to three superstars it somehow managed to draft all on its own, without it ever amounting in vast postseason success. Sometimes, even a well-handled rebuild fails to amount to much, so OKC winds up to do it again.