Posted on July 26, 2012 by Jeff Mattinger in Baseball,Headlines

The Detroit Tigers (53-45) and Cleveland Indians (49-49) will continue an important American League Central series on Thursday night at Progressive Field, with the first pitch scheduled for 7:05 ET 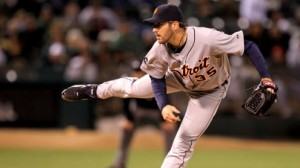 Detroit has won 14 of its last 17 games and is tied with the Chicago White Sox atop the AL Central standings.  The Tigers continue to be led by All-Star third baseman Miguel Cabrera offensively, who is hitting .340 with 19 home runs and 66 RBIs in 78 games against the Indians since the start of the 2008 campaign.  He is tops in the majors for all active players in round trippers and RBIs against the Tribe in those categories over that span.  Detroit is 14-2 as a road favorite of -150 to -175 the last two-plus seasons, with the “under” going 11-5 in that span.

Tigers starting pitcher Justin Verlander (11-5, 2.42 ERA) has won his last three outings, including a 4-2 home victory over the White Sox, allowing two runs and four hits over eight frames.  The right-hander is 6-3 with a 3.08 ERA in 11 road starts, issuing 14 walks and striking out 81 batters in 79 combined innings.  In 28 career games versus the Indians, Verlander has compiled a 13-12 record and 4.70 ERA, but suffered a 2-1 setback at this ballpark on May 24.

Cleveland has turned into a mediocre team in all facets of the game, scoring three or fewer runs in 11 of its last 13 contests.  “We need to pitch better,” commented Indians manager Manny Acta.  “We also need to swing the bat better.”  The Indians are 14-14-3 in their 31 series this season, but have gone 5-9-2 in their last 16.  Cleveland is 2-0 as a home underdog of +150 to +175 this season, with both games falling short of the total.

Indians starting pitcher Zack McAllister (4-2, 3.21 ERA) has watched the club alternate wins and losses over his last four outings, coming off a 3-1 home loss to the Baltimore Orioles, allowing three runs and five hits over 7.2 frames.  The right-hander is 2-1 with a 3.13 ERA in six home outings, issuing nine walks and striking out 33 batters in 37.1 combined frames.  He has yet to record a decision against the Tigers in two career starts, surrendering two earned runs and 14 hits over 11.1 innings (1.59 ERA).

Sports bettors will likely back the Indians due to their 4-0 mark in McAllister’s last four starts as an underdog, while the Tigers are 5-17 in their last 22 games at this ballpark.