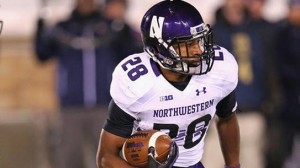 The Penn State Nittany Lions are 5-0 heading into a Week 6 matchup at Northwestern. The game will air at 11 AM (Central) on ABC, and the Lions are 13.5-point favorites according to college football oddsmakers at bookmaker 5dimes. The game has a high over/under of 52.5 points, a reflection in part of how PSU can run up a score as it did last week in its 45-14 win over the Indiana Hoosiers.

Penn State has really only had one close call in its 2017 schedule, a Week 4 win over Iowa that saw Penn State score on the game’s final play to emerge with a 21-19 victory. Penn State has been led by quarterback Trace McSorley and pass-catching backfield mate Saquon Barkley. McSorley has thrown for 1,352 yards at a 65.6 percent clip with 12 touchdowns and four interceptions.

Barkley has rushed a team-high 86 times for 574 yards and four TDs, but he has caught for another 386 yards on a team-leading 27 receptions, with two receiving TDs, including an 85-yard TD catch this season. The pair has been relatively unstoppable and Northwestern has had its defensive problems this season. Northwestern gave up 41 points to Duke in Week 2, and it surrendered 33 in a nine-point loss to Wisconsin last week. The Wildcats did hold their own defensively against Nevada and Bowling Green, but neither program matches the kind of offensive prowess Penn State brings this week to Chicago.

Northwestern starting quarterback Clayton Thorson has had his problems this season. Though he has thrown 64 percent for completion and has over 1,000 yards, he has thrown five interceptions to just seven touchdowns. Leading backfield rusher Justin Jackson has been mediocre at best, too, with 4.3 yards-per-carry on 64 attempts, and four touchdowns. The Wildcats have spread the wealth among five receivers with at least 100 yards, of which Jackson functions as one with 103 yards on 13 catches. Jackson is a workhorse and the Wildcats will predictably ride their top offensive weapon.

The Wildcats have scored eight rushing TDs on the year and matched that with eight receiving TDs, but it may be tough to generate mass-yardage against Penn State this week. The No. 4 ranked Nittany Lions have 13.0 sacks on the season, seven interceptions and 81 tackles for loss. The defense has been aggressive and ranks No. 3 in points allowed (just 9.4 per game). This game has the makings of a much bigger blowout than college football oddsmakers are crediting it for. Expect Penn State to prevail by close to 20 points with the ‘over’ seeming more favorable on the total. Thorson will feel the pressure of an aggressive PSU ‘D’ in a tough loss this week for the Wildcats.